Hey all!
Over the next few days, I am going to be adding both national and state fair shows to the events page, so please be patient :)
Feel free to RSVP if you are attending!
*If I make a mistake, don't hesitate to correct it!

I find venting my frustration and emotions through blogging helps, alot. Today I had the morning milking off. Felt good to sleep in til 6. Got alot of house work done, I can see the kitchen sink again! Almost forgot it was there. Everything was going well, that is, until my husband David came in for lunch. When I asked how the morning milking went he just replied "ok." From the tone of his voice I could tell something was wrong. In a quick motion he wrapped me in a big hug then let it out:…

First of all I would like to introduce myself. My name is Tom Leonard. I have a wonderful wife Denise and a marvelous son Casey. We started our own farm in April of 2008. We borrowed alot of money for high priced cows to go along with the $20 milk. Thing are not so good for us now as it is with many across this nation.

On May 26th I found out about the Mercy for Animals investigation that took place at Conklin Dairy Cattle LLC. I watched the YouTube video as many of you have.…

Networking for the Future

Throughout my college career, one question that has always been in the back of my mind is whether I would find a job after graduation that will make me happy. I have been…

Boston, and especially the city’s storied sports teams is typically what people associate with Massachusetts. The…

A short story about my summer internship last year....

On our farm in southern Michigan, we have completed our wheat harvest. The straw is baled and put away. It might not sound that exciting, but it sure is a good feeling to have that job behind us.

The Value of a Summer Internship

In high school, the common question you may have been asked by your teachers, friends, and family was, “What do you want to do after college?” We weren’t even done with high school yet, let alone college, and we were expected to have a step-by-step guide to our…

I've been working for Progressive Dairyman magazine for nearly 10 months now, and I'll admit to jumping at the chance to feature Pennsylvanians -- especially here on Proud to Dairy.

Here are two photos I've received from dairy families in western Pennsylvania, where I also call home. They were just too cute not to share! 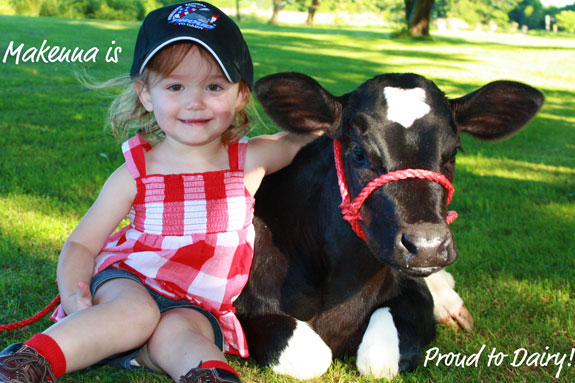 Pictured above is Miss Makenna… Continue

The following are the Proud winners of the Proud to Dairy Contest 2010. Great job everyone on your entries and we'll see you again at the next contest!!!
Continue

A local dairy farmer dumped a tank of milk on July 4th. He claimed it was an organized effort, but he is the only one I know of to dump. Did anyone else know there was a plan to dump milk on the 4th? Did anyone else dump their milk?

The following post is the speech I gave at the National Junior Holstein Convention last weekend. I think it's a great message for dairy advocates of any age. Let me know what you think!…

Organic vs. “Conventional” dairy. Lately I’ve been reading some misconceptions, misleading information and just misinformation that’s been flying around the blogging world comparing the two. I wanted to respond with true information regarding this subject.
But may I first begin by saying, Dominic and I are friends with MANY dairymen and women, both conventional and organic. We are all friends with one ........ to read more.......…