I have to tell you about one of my projects.

I've been wanting to tackle this for a decade, it seems. But life tends to get in the way of good intentions, doesn't it?

My county has a great history. I think most do, but ours is a true wild west legacy. For many years, Lincoln County, Idaho was the end of the rail line, home of the coldest beer in the west and filled with the stories that only a town populated by miners, railroad men and ranchers can tell. I've lived here…

Give yourself a break this holiday season

I’m once again on a mission.

Those of you who know me or read my work know this is not a surprise.

I’m always up to something.

This time my crusade is about you.

The normal people in the world.

Those of us who are doing the best we can to care for our families, our farms and the people and places about which we deeply care.

All too often, though, we take care of anyone and everything other than the one person we need to take care of…

Have your puck and eat it too

Corn harvest started here this week.  That means long days and short nights around here for a month or better.

Harvest is my favorite time of year.  I like it more than New Years for that feeling of renewal and new beginnings. However, it does present a few challenges.  For me, I become a single parent as my husband is in a corn chopper sun-up to sundown.  I don’t mind a bit, but keeping the household running at it’s typical efficiency – which occasionally hits moderate success, but…

American Dreamin' in the neighborhood

It’s one of my favorite holidays.

No, I take that back. It’s totally my favorite holiday.

Obviously, I’m a proud American and embrace the tradition of celebrating our history. But, it’s also about my own family traditions.

When I was in grade school and on into junior high, my cousins and my siblings would come in from all over the West to visit my grandmother. In my…

You know what makes me crazy?

OK -- that's a lie. A LOT of things make me crazy. Far more than three, because I'm cranky in real life.

In this particular case, we'll narrow it down to three.

1) Attending dairy meetings at which no milk is served.

This makes me nuts! We hold a meeting and invite fellow dairy producers then serve the competition? We put margarine on the table? Who does that? Why does it make sense? I always make a scene, which…

Standing up and speaking out.

I’ve been in the middle of an internal debate.

Back in November, I attended the United Dairyman of Idaho convention. When I got the registration packet, there was the usual list of business meetings and seminars. And then there was “Ladies Craft Activity” and “Ladies Tour of the Statehouse.”

I have to admit, my first reaction when I see the “ladies activities” on the registration sheets every year is a slap…

A transition has occurred at the Fitzgerald household.

I celebrated the transition by coming down with bronchitis and spending a beautiful Southern Idaho autumn week inside the house, pretty sure I was never going to breathe again. Nonetheless, we had evenings at home together this week. We spent a Saturday at home. I can't even remember the last time that…

Having company over to dinner

I think the dairy gods are trying to tell me something.

I need to visit Wisconsin.

Here's what I know about Wisconsin. In Wisconsin they have beer and cheese and cows.

Three of my most favorite things on the planet.

Why am I waiting? I should book my trip now!

In real life, I'm working on a trip to Wisconsin ASAP. As soon as I can find space between kids activities and other responsibilities, I'm on the next flight to Green Bay. I'm even a Packers…

I pulled into the parking lot dreading the experience. I planned on hating it. I wanted to be mad and disgusted. But, I went into PCC Natural Markets in Edmonds, Washington, anyway. 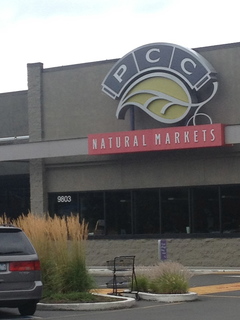 I was looking for a specific kind of caramel sauce – one I knew I could find in Seattle, but I didn’t have time to get to Seattle. I was visiting the Edmonds area for my husband’s class… By the time you read this, I’ll be hiding.

It’s not too hard to find me. In Chelan, Washington, there is a winery called Karma Vineyards. They claim they didn’t name it after me. We all know the truth. It’s always all about me.

I’ll need the wine. As I write this, I’m headed into fair week. As an FFA and 4-H Mom and leader, fair week is one of those weeks I look…

Have you noticed I set lofty goals and then I can't meet them?

This time last month I was going to try to reach 100 consumers. I don't think I did. I did talk to a few, though. So I figure if they then talked to a few of their friends, I got close to 100 by multiplication. There was a time in my life where I would wallow in self pity for not making a goal, now I specialize in what I call Justification Optimization. I decided I would focus in high quality…

Keeps your friends close.... you know the rest....

I suppose, since I’m involved in the dairy industry, it should be the most fun month of the year.

Don’t get me wrong – I’ve been known to throw candy at a parade or two, maybe participate in an ice cream social. Mostly, though, I avoid it.

I’ve been avoiding a lot of things lately. Turned off my Facebook for a day this week.  That’s a big deal for me.

The problem with the dairy celebrations and Facebook is essentially the same.

I hang out with cool people.

I have an eclectic group of friends and neighbors. It makes my life rather interesting and, more often than not, makes my world quite tasty.

The other day I stopped in at my friend Stacie’s house. Just so happens she and her family own Ballard Family Dairy and Cheese not too far from here in Gooding, Idaho.

Plans and Pageviews; It takes one to get the other

Those of you who read this blog often know that I often make grand plans.

You also know my plans have been known to fall apart. Take, for example, the cheesecake adventure of last November.

So a few months ago, in one of my plans, I was going to get 300 pageviews on my March 1 column.  It’s now April and I had planned on telling you about my tremendous success. There was just one problem.

I got sick, as in coughing till your sides…

Target or Attraction? Social Media project has its pros and cons

“The whale that sticks his head up is the one that gets shot.”

That’s the line my husband uses every time I ask him to do more public relations for the dairy.

“Besides, we’ve spent decades developing a certain way of doing business – we’re not going to give it away for free,” he says.

The official press release just came out!  So proud of my husband and his brothers and our amazing staff!

As I mentioned in my Jan. 1 post, I'm trying to learn how to use social media to promote this page and our farm. My goal is to master this process using about 15 minutes a day.

So in 3 days, I've mostly done a lot of research. But in a matter of about 5 minutes I did create a fan page on Facebook for this page. I haven't talked my husband into letting me set one up for the dairy, but I'm closer than I thought I'd be at this point.

Right now, it's a matter of developing a…

Somedays, the world of social media makes my head spin.

I discovered  Pinterest a few months ago, and since then, became obsessed with surfing through volumes of ideas and information. For those of you who haven't discovered the new time sucker, let me explain. Think of Pinterest as a giant bulletin board in the sky. For those of us of a "certain age," we used to have these in our bedrooms or kitchens and whenever we found…

Of plans and cheesecake

In my continuing quest to find fun and tasty ways to consume dairy products, I have met some wonderful cooks with great recipes to try.

You may recall, last summer I met my new best friend Rita Holt. Rita is an award winning cook, including several first place prizes in the Athens, Tennessee, MooFest contests for using dairy products. I’ve maintained that if she…

In October, everything in a 4-H mom's world seems possible.

It's the start of the new 4-H year. In this county, it's been 60 days since the last fair, and it's usually long enough for me to forget about all the things I said I would never do again during fair week. (Although I admit there are some years when the forgetting takes…