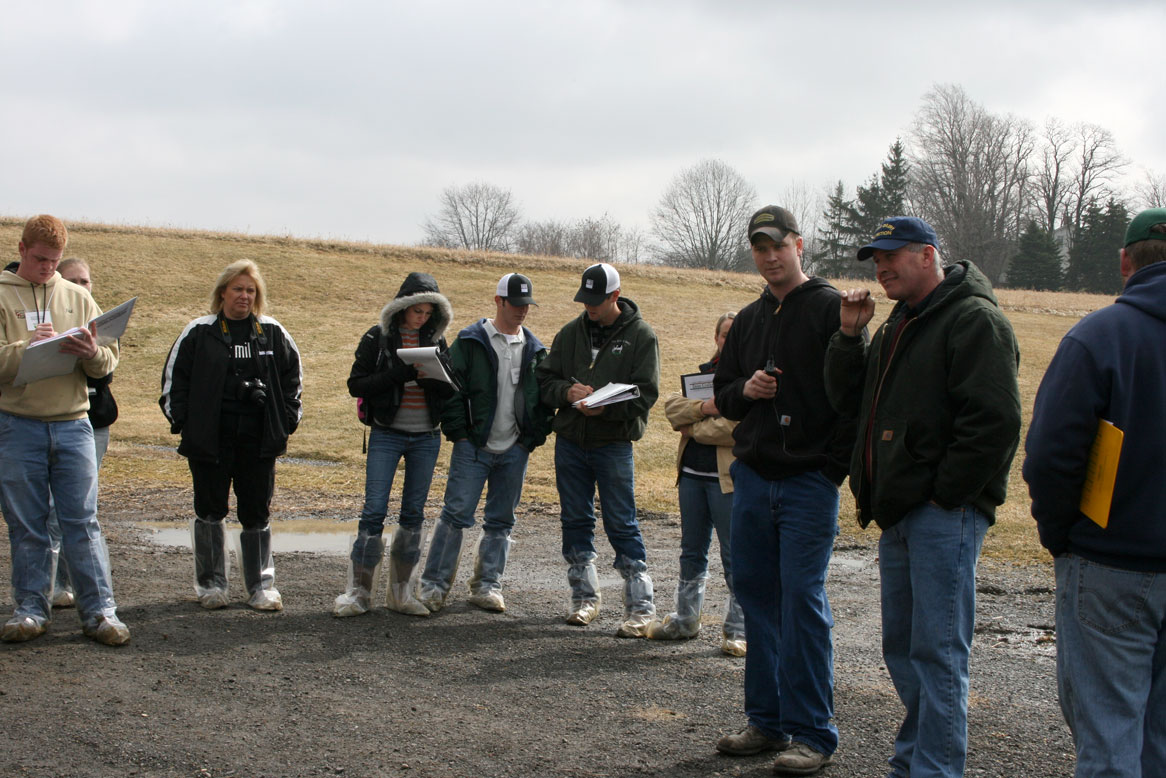 By: Ryan Curtis
On March 27-28, the Empire State hosted 124 students from the top dairy programs in the U.S. and Canada as they competed in the North American Intercollegiate Dairy Challenge. The 31 schools were divided up on four dairies in the Finger Lakes region: Elmer Richards and Sons Farm, Twin Birch Dairy, Venture Farms and Currie Valley Dairy.
The competition started on Friday morning at the Double Tree Hotel in Syracuse, New York, at 7:15 when the students were separated from their coaches and learned what farm they would be analyzing. Instantly the teams opened their folders and began searching the pages and working on ideas and strategies among their team members. After an overview of the rules, the teams started boarding buses that took them to their respective dairies.
At 8:50 a.m. the buses arrived at the dairy where the students were greeted by the dairy owner for an overview of the dairy and its goals. Then students started to implement their strategies by dividing up responsibilities and headed off to different areas of the farm to measure stalls, sift feed, count cows lying down, analyze communication protocols and assess the overall conditions of the animals. At 11 a.m. the students met with the producer again and asked questions as a group. They would have a private interview with the dairy producer, so questions were kept elementary so as not to give away any ideas or details others might have missed.
Contestants had lunch and returned to rooms – different rooms than they slept in – to hammer out details for their presentations. Computers and financial information were given to students as they returned from the dairies, and each team worked frantically until 6 p.m. to get their presentations done. Their only break was a 12-minute interview each group had with their dairy’s owner, where they asked more pointed and specific questions. Between 6:00 and 6:30 p.m. the groups handed in their computers and started making their way into the dining room for dinner and a presentation about agriculture in the Northeast.
With presentations made, but not over, students only slightly relaxed as they ate. The organizing committee provided a little diversion to help the contestants breathe easier. Each contestant was given tokens to use in the ballroom where game tables were set up. No money was exchanged but students that won the most tokens had the best chance to win an iPod or other prizes that were provided by sponsors. For a time, students had fun and didn’t look so worried.
Breakfast was quiet with much for the students to think about. At 6:45 a.m. the first teams picked up their laptop and headed to their rooms to practice and review for one hour before their presentation. Each of the other teams that presented before lunch waited to pick up their computers one hour before their presentation and made their way to the assigned rooms at the appointed time each hour.
In the meantime, the rest of the students that presented after lunch went to a lecture and discussion session to talk about current issues and possible ways to handle them – issues like carbon footprinting, customer messages and dealing with activists. After the discussion, a game room was set up for students to help them unwind. They rotated between Wii, Xbox and other gaming stations at regular intervals. The game room is where the students finally started to relax. However, the afternoon group knew the presentations were coming and checked their watches in anticipation.
After the first students emerged from their presentations, they took pictures with their coaches and mingled with the sponsor booths set up in the hotel hallways. According to one student, this aspect of the dairy challenge was most important: Establishing relationships and networking with others in the industry.
At lunch the morning presenters went to the lecture and discussion session followed by games, while the rest of the contestants prepared for and gave their presentations. By 6:30 the judges finished tallying their decisions and a committee organized the results for the banquet. At the banquet, judges gave an overview of their respective farms and some of their thoughts about the dairies’ strengths and opportunities. As the judges talk about the farms, students looked on with expressions of affirmation and concern as they realized what might have been said but was too late to change. Finally, after gifts and gratitude were given to participating farms and participating committee members, the results were read for each farm. Worry and hope battled for ground in the minds of onlooking students as school names were read for silver, gold and platinum.
There can only be one platinum first-place team, though the effort of all the teams is deserving of respect and admiration. These students are the future of the dairy industry. No matter where they go from here, each young man and woman will take with them lessons they couldn’t get in the classroom and a jump-start on experience they will need in the field.