Living a rural community, it feels like we are all family.  We may not be family by blood but there is something about the rural way of life and values that pulls us all together.  We can celebrate together at a wedding, cheer for each other’s child at a game, be a shoulder to cry one with the loss of a loved one, and pull together in a time of crisis.  These past two days I have witnessed the last one first hand.

On Sunday June 29, 2014, late in the evening, around 10 p.m. to be exact our weather radio was going crazy and so were the weathermen on t.v.  We were under a radar indicated tornado watch.  My husband and I were glued to the radar, while our boys slept snug in their beds.  We could clearly see that we were in the storm’s path, but on the south end of it.  It was going just north of the highway and we live on the south side.  After the storm passed, things around the house seemed okay so we settled in for the night.  About 11:15 p.m. Peter’s cell phone rang.  It was a friend asking if we still rented this one farm for our heifers.  My husband told him no, and told him who did.  Come to find out all the buildings on this farm were leveled in a tornado.   This farm sits about 1 mile north of us and 1 mile east.  Right were the radar map showed the storm going.  We gave each other that look only husbands and wife do when they are thinking the same thing.  We put our rubber boots on, grabbed some flashlights, and headed out to check our farmstead and check in on our neighbors.

First stop was our own farmstead.  Everything looked to be in place.  Then it was over to the neighbors.  In route, we noticed that another neighbor’s hoop barn for his replacement heifers was flattened.  We would later learn that they did lose one heifer and had one seriously hurt that they are treating with tender loving care. We made it to the neighbors to see only the house and an empty Harvestore standing.  Truck after truck started pulling in to see the destruction.   We were analyzing things by headlights, flashlights, and lighting strikes in the night sky.  Luckily the rain had stopped.  These neighbors are retired dairy farmers.  The pasture and cattle lots were rented by our good friend for his replacement heifers.  They also stored some machinery there in the sheds.  At this late hour of the night we could tell everything was flattened, including 2 silos.  Debris was spread across the pastures and up in trees.  Everyone was assuming the cattle were not in the lots or buildings because we couldn't see signs of them.  We kept looking out towards the pastures to see if we could see any cows.  It’s hard that late of night to tell the different many yards out if that white blob was a heifer or a junk of steel.  I believe I was the first one to spot something moving.  Out of the corner of my eye, I saw something white walking along the hillside.  I watched it for a moment and shouted, “I see one!”  It was great to know that at least one was alive.  After visiting for a few moments, we decided to keep driving around the block.  Within this same vicinity we rent 3 different pastures for heifers.  We could see from the road that things looked okay, but were not going to venture back into the woods and hillsides at this time of night.  It was back home and to bed for us.  The morning was going to come way to soon.

Monday morning after milking Peter and the hired hand loaded the Ranger and truck with a chain saw and fence fixing materials.  They were off to drive around those 3 pastures and see how things were.  All our animals were accounted for.  He spent the remainder of the morning clearing downed trees off of fences and fixing them.  After that he went over to the neighbors to help with clean up.  He walked the crop fields picking up debris.  While Peter was fixing fences, I stopped by to see how clean up was going.  It was no surprise that everyone from far and near was there doing something.  There were trucks and trailers parked on the other side of the road because people hauled their own skid loaders over to use.  All 35 heifers were found, rounded up, and moved to a different farm.  No major injuries that I have heard of, but there were some minor ones.  No one was standing idle, everyone was helping in some way or another to start cleaning things up.  At lunch time, people showed up with a large spread of food to make sure the volunteers are fed.  News crews from Madison came out and interviewed the farm owner and showed the world the devastation.  NBC 15 Report  Channel 27 report 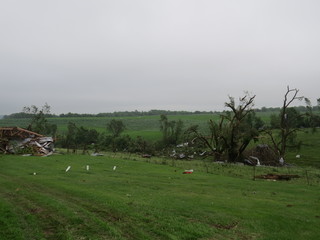 Today, Tuesday, the governor has visited the farm and seen firsthand the damage.  The clean-up continues.   These two farms were not the only ones damaged in this tornado's path.  It has been declared an EF1.  There were some resident houses just on a few acres in the country that were hit, along with cars parked outside.  Numerous trees were down and the township patrolman started working at 2:30 a.m. to clear the debris. 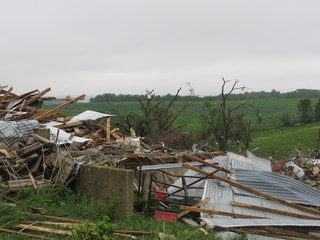 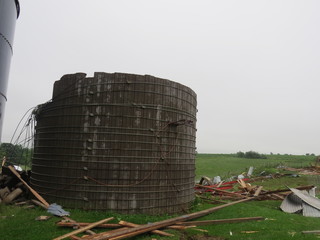 Even though a heifer was lost, a hoop barn destroyed, and 8 other farm buildings wiped out there is a bright side to this picture.  No one was hurt or home in the house at the time the tornado hit.  All heifers have been accounted for.  The dairy barn was empty so no milk cows were displaced.  Things could have been a lot worse, and I am confident that our Heavenly Father was watching over the area and helping to protect us.

It’s fun to celebrate with family and friends in the good times, but it’s watching everyone pull together in a time of crisis that makes living in a rural community the best place to live.  What happened here in Fennimore, WI is just a small example of what happens in rural communities across this great country we call America whenever a crisis occurs.  We will have a cold beer together and watch the sunset over grazing cows, and then have each other’s back when needed.  As we approach the celebration of Independence Day there is no place I would rather live.

Christina, this post really moved me! Neighbor helping neighbor is definitely one of the reasons I love living in a rural community! My husband and I have also experienced it first hand. Many of our neighbors have helped us out over the years in various ways, just as we have helped them when they need it. I was also very interested in your account of the tornado. You seemed so calm about it. I don't know how you do it! Since we live in Vermont, we never get tornados and I am very glad we don't! But from now on, if I hear about tornados in your neck of the woods, I will be praying that you and all your neighbors remain safe!