“Tell us about the video you created for Karma and the Idaho dairy campers. What feedback did you receive?”

I got an email May 20th from Karma Fitzgerald.  I know of her from her blog posts on Proud To Dairy for Progressive Dairyman, but I never thought I would get an email from her, and I would have NEVER guessed that she (or anyone else, for that matter) would want me to SPEAK to a group of dairy campers in Idaho!!!

Now I have to admit that when I read that sentence in the email, my first thought was, “She wants me to COME TO IDAHO?!?!?”  but after I read a little farther, I realized that she was a lot smarter than I was, and she was asking me to SKYPE in to visit with them.  Whew!  That made me feel better.

Mom and I talked about it for quite awhile before I emailed Karma back.  We both thought it was a great honor to be asked.  After all, I’m just a kid.  I’m not even a dairy family kid.  I’m not a Tulsa State Fair or Sooner State Dairy Show Grand Champion winner (yet.)  Then, when I read on and found out that the OTHER speaker Skyping in was none other than GREG PETERSON of THE Peterson Brothers, I was REALLY confused. Those guys are world famous.  They’ve been on national television, they’ve had millions of hits on their videos, AND they’ve performed/spoken at the NATIONAL FFA CONVENTION!!! I didn’t care that I was going to be an opening act for him, because at least I was going to be on the same stage, so to speak.  I was wide-eyed and fan-girling all over the place. 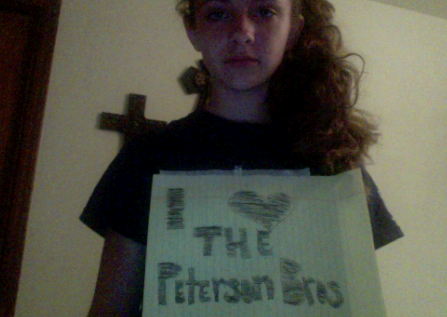 Then we pulled out the calendar and figured out that the speaking date was on a dairy field day here in Oklahoma.  (Sad face.)  Not only was I going to be out of town dairy judging, but I was going to be at a facility with no internet.

We talked about it some more, I was bummed, and then my mom suggested making an iMovie for Karma’s dairy campers.  I could find out questions to answer ahead of time and talk to them with the iMovie.  IMovie is kind of my thing.  I use it a lot in school to make book reports, science fair project reports, and other stuff.  So I emailed Karma back and told her the situation and offered to make the iMovie instead.  She thought it sounded great. 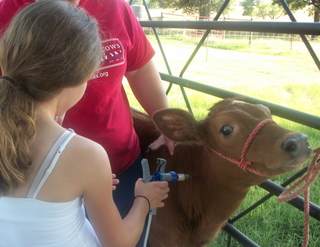 Part of my presentation was made of photos showing the kind of work I’ve done with my dairy project over the last four or five years.

It also showed me doing dairy stuff since I was a little over a year old.  Other parts of the movie were of me talking to the camera and answering questions that Karma had sent.

So I locked myself in my bedroom and talked really quietly so no one would hear me, and and I talked to my computer screen answering the questions Karma had sent.  It was a really weird feeling. She also asked me to talk a little bit about my blog and how I got it started.  She was going to print off some entries from my blog to give them as examples.  She really wants to see some of them start their own blogs.  I think the more, the better.  She also wanted me to say whether or not I consider myself an agvocate.  Of course I do!

Last, but not least, I had to end my movie with a plug for the 2013 Flavor Face-off and for the campers to vote for Karma and for me. 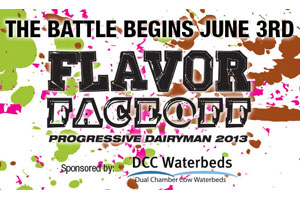 I posted the movie on YouTube and sent Karma the link to the video.  That way, she had no trouble accessing it in Idaho.

Karma thanked me for all my hard work.  I got one post on my YouTube video saying that I was someone’s hero.  Karma said that she would be sending pictures and more.  I have no idea what “and more” means, but I’m excited!  As soon as I receive pictures, I will post them.

Today I received a card signed by the dairy campers and staff and a generous gift!  It was totally unexpected, and it made my day!!! 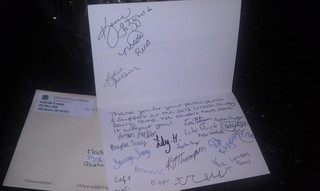 Love this young lady!  She did a great job! There's a little something on the mail and more coming....Thank you so much, Maddie, for all your hard work!