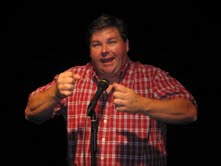 Q. Your dairy background?
I was raised on a dairy farm as the youngest of six kids. Shortly after I graduated college, my brother and I partnered up in a dairy.

I’m just happy my last milk check had a comma, because my last feed bill had two.

Q. How did you get started in comedy?
Growing up I noticed something wasn’t quite right. In the second grade, I was banned from show and tell for telling what I had seen while helping my uncle castrate some beef calves. I might have turned some of those city kids into vegetarians that day.

My mom is actually the one who inspired me to pursue my comedy. I realized that comedy and farming have similarities: Neither one require good looks, and spreading manure makes things grow.

When I started performing at open-mic nights, I was doing jokes and everything under the sun. It was at one of those amateur comic nights that someone gave me some very important advice: “You need to talk about what you know: agriculture and farming.”

Q. How often do you perform?
I perform as much as I can without my brother thinking I’ve quit the dairy business.

I’ve performed shows for a variety of agricultural organizations, from John Deere and Farm Bureau to Vita Plus and Michigan Milk Producers. I do at least five shows a month in a comedy club or fundraiser somewhere to work on new material.

The biggest kick I get out of doing comedy is performing for non-farmers. I get to show city folk the funny side of the farm as well as educate them. You would be amazed about how many misconceptions non-farmers have about chickens and soybean milk.

Q. Funniest experiences interacting with dairy farmers?
When farmers actually take a vacation, we like to see other farms on our vacation – it’s the law. Performing around the country, I always end up at someone’s farm.

The funniest thing I enjoy is seeing how other farmers fix things, or I should say, their maintenance program. I’d pay a dollar to any farmer who still has the original parts, maintenance or safety manual of any piece of equipment on their farm.

I’m sure the design engineers at Germania or BouMatic never thought you could fix a pulsation box with an ear tag and a latex glove.

The funniest thing I ever saw was a wooden screwdriver stuck in a socket to keep the lights on in a barn. This had been there for at least 100 years because this farmer’s great-grandfather put the screwdriver in the socket himself with a note attached which read, “Doth not taketh this outeth, or thy lights shall go offeth.” That was written in original English. PTD