The Dairy Goddess label hasn't always been attached to Barbara Martin, though many people know her as that now. Before she became the social media diva for the dairy industry, Martin actually ran through some horrible luck before the economic downturn that everyone has had to live through the past two years. To come through it all not only advocating for the industry that nearly took away everything she and her husband had, but optimistic about the future, should give us all reason to believe we can get stronger – if we do it together.

Martin grew up on a dairy farm and is proud to say she is a third generation dairy farmer. Her family and her husband's family ran dairies in Southern California. With urbanization ever sprawling from the metropolis, Martin and her husband decided to sell their dairy and move up to the central San Joaquin Valley area.

"When we lived in Southern California, my husband was working on the dairy with his dad and brother, so there wasn't really enough room for the wives," says Martin in the office overlooking the parlor. "We all worked outside of the dairy. When my husband and I decided to move we were kind of in that mid-life decision: Are we going to stay in the dairy business or are we going to do something else? My son was just starting Cal Poly and my daughter was already in college. There really weren't very many permits for dairies being handed out and even now there are almost no new dairies. We found this dairy and it was just a flat barn and it was an older dairy. I don't think either of us expected we would have to work as hard, physically, as we have, but you do what you've got to do."

The Martins moved in June 2006, just in time for the heat wave, she says, which caused some transition problems. After culling about 50 cows on the new dairy, the Martins looked to improve the facilities. When they tried to build a new barn, even with good milk prices, they ended up spending almost twice as much as they had planned because Hurricane Katrina hit the U.S. the year before, making the price of concrete, PVC and other building supplies jump because of the rebuilding in damaged areas. The Martins were also competing with Chinese companies that were also buying a lot of construction supplies.

"Our building costs doubled and our milk check went to half," says Martin, whose dairy has 850 head. "This dairy is really still under construction. So when all this happened we thought, we're going to do this together."

Along the way, Martin started to look into another venture. She wanted to make cheese.

"I've always seen all the milk in the tank and the cows and I never saw how it became all the different products in the store," Martin explains. "I wanted to become more 'domesticated' when we moved. I wanted to get back on the dairy again. I thought it would be great for me to do something with our milk. So I took a class at Cal Poly San Luis Obispo in 2008. I hated the book work part of it, but I loved having my hands in the vat. I came back ready to get started and the milk prices dropped again."

Martin's dream of making and selling her own cheese had to wait, as husband and wife faced more setbacks that the whole dairy industry was struggling with.

"It's been hard on my husband because we have lost so much," Martin says with tears gathering in her eyes. "It's really easy, if you want to, to say to the other, 'it's your fault!' But I'm glad we decided to do it together."

The dairy crisis not only changed Martin's plans, but her son's plans too. Martin says he was thinking about coming home after he finished his bachelors degree, but she told him she couldn't pay him.

"I think living through what we have lived through the last four years has really confirmed his decision to go to vet school and get a backup – to not just rely on the dairy business, but also create another means," says Martin. "When things got tough I had to tell him, I can't afford you. I said I would have to let our manager go and he could make his wages.

"He decided to stay in school," she adds with a smile.

The crisis affected everyone in the dairy industry. Large dairymen will tell you that even though they are big, they are hurting too. They say they bleed faster because of the size.

"This is the first time that some of the wealthy dairy farmers I knew from down south are saying, 'Barbara, this is killing us,'" Martin recalls. "To see a big, old Dutch man get tears in his eyes, it's a tough thing. I think that sometimes there are blessings that come when we go through trials. Maybe this is what we needed in order to say, 'Come on, let's get together.'"

For Martin, one blessing that came during these challenging times was a boost from social media. Martin started blogging as Dairy Goddess and found people appreciated what she did.

"As things got worse and worse, social media is kind of what gave me the confidence to purse the cheese making dream," says Martin, who also became a representative on the California Milk Producers Council in 2008. "I really don't promote my blog much, except for putting it out on my outlets and things. But I thought, 'If I can get this many followers and interaction from social media, maybe I can do the marketing and things to be successful with the cheese.'"

Martin is only a few steps from starting her cheese making business, which she will market to wineries and farmers markets. She plans to be in production soon.

"I have four recipes," Martin shares with a flare of excitement. "It is a Fromage Blanc with four flavors. I'll sell them in six-ounce containers with my Dairy Goddess Farmstead Cheese logo. It's really ready to rock and roll, I'm just waiting for my pasteurizer to be redone and the inspectors OK. Everything else is ready to go, logo, packaging, etc. I am right there." 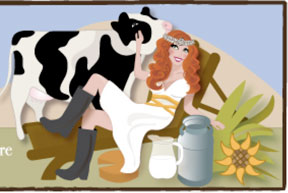 The logo was her first investment in this venture. She hired an artist and explained what she had in mind. The logo is actually a close representation of Martin's mindset – blue skies and happy cows.

"I'm optimistic by nature," Martin says. "I'm excited about my new venture of processing cheese. It's something that I was pushed to do because of the downturn, I think. And I think that surviving the bad times that we have, we learn from it. I am optimistic to take what we have learned and bring it into the future of the dairy. Hopefully we will change our price discovery and make our industry better."

Martin doesn't think a quick jump in price would be the best thing for the industry. She doesn't want to see high prices quickly; she would rather see sustainable prices for a long time.

Martin is proud to be a dairywoman, because of the people she associates with and the quality products it provides to consumers. She says she will continue to blog and be an advocate for the dairy industry through social media to help reconnect the consumers to the food they eat.

"I think that people have gotten out of touch with their food source. They live away from rural communities and they don't even get to drive by a dairy. I think that people need to reconnect with their food. They need to realize there is a person behind it. It helps put a face with the food. That jug is just a jug, but to realize that there is a family behind that jug of milk or that piece of cheese puts a whole different light on it."