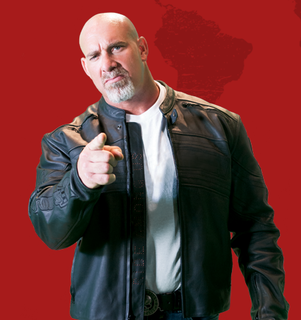 “OK, before we start, I just want you to know that I never had a cheese curd before coming here [to World Dairy Expo],” he said. “Now that I’ve had one, I still don’t understand what all the fuss is about.”

I was taken aback someone would utter those words in the presence of many Wisconsinites, but I guess when you’re 6 foot 4 and 260 pounds of pure muscle, you kind of get to say whatever you want.

In fact, that may make Bill Goldberg one of the best choices for a spokesman for the “Chew On This” tour, a movement to make the public aware of the domestic and global hunger issues and to dispel myths about agriculture practices. The tour is organized by Nutra Blend and Elanco, and those organizations are reaching out to other companies to get involved with their “Drive to Feed” movement.

“We knew we had a fight on our hands,” said Randy Shanks of Elanco. “What better symbolism than to have the toughest guy out there as your spokesperson?”

“I’m loud, I’m boisterous,” Goldberg says. “If the industry needs a voice, I’m happy to be that voice.”
The tour features two tractor-trailers: One is utilized as a movie theater and the other as a kitchen. Both have an intimidating image of Goldberg splashed across the sides.

The large red trailers pull into public places such as state fairs and colleges. They draw people in with the lure of free food and invite them to watch a 12-minute movie. The movie showcases Goldberg conducting “man-on-the-street” interviews, where he asks random people basic questions about food production, covering topics such as antibiotics, carbon footprint and the nutrition difference between organic and conventional.

As most of us in the agricultural industry have come to expect from such interviews, most of the public provide responses to the tune of “Most meat is full of antibiotics, and the only way to enjoy safe food is to buy organic.”

In the movie, agriculture experts then appear to dispel the myths and provide the facts about food production.

“People can’t believe how stupid they are after watching this video,” Goldberg said. “They’re embarrassed for themselves and for those on camera. There’s a huge difference in them from when they walk in [to the trailer] to when they walk out.”

Shanks said that one of the unique things about this tour is that it doesn’t stop with the people who watch the video. Many people who watch it then go tell their friends to check it out, and often the local media comes out to cover the tour.

Shanks says future plans for the Drive to Feed movement include “taking action” domestically through food bank donations and reaching a goal of provided 100 million meals a year in the U.S. Learn more at www.drivetofeed.com.  PTD

11.4.2013 update: Matt Harper says of 2014 plans:
"We do not have the calendar completely finalized for next year but it will more than likely be similar to 2013 with approximately 100 plus stops. We may be at even bigger events next year so the number of people going thru the trailer is hard to estimate. I would say that we will have well over 100,000 people go thru the trailer next year but depending on how the schedule turns out, we may have far more than that. We will be launching a new portion of the program early in 2014."