I hang out with cool people.

I have an eclectic group of friends and neighbors. It makes my life rather interesting and, more often than not, makes my world quite tasty.

The other day I stopped in at my friend Stacie’s house. Just so happens she and her family own Ballard Family Dairy and Cheese not too far from here in Gooding, Idaho.

They milk Jerseys and then make cheese that they sell into area grocery stores, restaurants and farmers markets.

I stopped in because I needed some of their Swiss to send to a friend in Washington who has an obsession with Swiss cheese. And also I needed to feed my own obsession  -- halloumi.

If you’ve never played with halloumi cheese, I’m pretty sure you’ve been leading a sheltered life. It has a higher melting point than most cheese, so you can handle it the way you might handle a piece of meat. You can fry it or grill it  -- heat it any ol’ way you’d like and it will hold its shape, get a nice crust on it and delight your taste buds.

Traditionally, halloumi is made from sheep or goats’ milk. It’s entirely yummy that way. Stacie and her family make their halloumi-style cheese from Jersey milk, so its flavor is different than the traditional stuff. She calls it “Idaho Golden Greek.” Putting the cheese on the barbecue fascinates my kids. They like it so much they’ll grab it right off the grates. The stuff doesn’t last too long around here.

While I was at Ballard’s farm, Stacie surprised me with a giant bag of halloumi – the end pieces she doesn’t package. 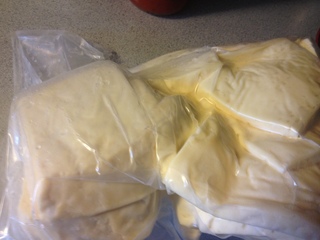 Oh my goodness! It was like Christmas. She usually saves the ends to use as samples but she had extra and shared them with me! I was so excited I raced home and started playing!

First I chopped it up into little squares and made it into croutons for my lunchtime salad. 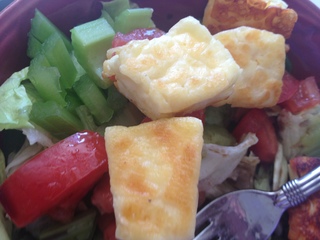 After perusing through the Ballard Cheese Idaho Golden Greek Cheese Cookbook, written by Chef Jane Deal, I threw some halloumi in a frying pan with apples and raisins and walnuts. I added some maple syrup and cinnamon and let it get hot and juicy.
It was soooo good. My daughter and I even fought over the last spoonful.

Sometimes, I just fry it lightly and eat it as a snack.

The cookbook gave me tons of ideas and I’ve been using it quite a bit lately as I work through the bag of ends, plus the two bricks of halloumi I bought from Stacie. I love it for another reason, though. It’s a great example of what I’ve been talking about on this blog all year: communication with consumers.

Chef Jane Deal and the Ballards met while Jane was co-owner of a small restaurant in Hagerman, Idaho. Stacie and her husband Steve frequented the restaurant and would bring Jane samples of their cheese. Jane, like me, tasted the Golden Greek and was hooked.

“We served the Golden Greek every week on the menu, always in a different way,” Jane told me. “Our customers started to order the ‘Greek of the week’ without even asking what it was.”

Over the next few years, Jane and the Ballards continued to develop recipes using the halloumi style product. That resulted in the cookbook.

My point is, if the Ballards and Jane hadn’t started talking, the partnership would have never happened.

In turn, the cookbook wouldn’t have happened. And guess what? All of it impacts sales for both Jane and the Ballards.

Jane told me she makes it a priority to work closely with the people who grow the products she uses in her dishes.

“Samples are one thing, but when you find out the trials and tribulations these growers and farmers have gone through to bring you their products, you gain a new respect and understanding. It makes me want to work harder to make sure my dishes showcase their products and honor the farmer's and/or producer's hard work,” Jane said.

And go eat some cheese.