"How many cows y'all milk? Where at? What kind of parlor?"

If Lancelot Holton gets figured out you're from a dairy farm, these will be the first three questions he asks you. Then he'll want to know what other dairy farms you've been on, where they're at and what kind of milking parlor they have.

It's obvious the 20-year-old Georgia native has a passion for dairy farms and milking equipment.

What might not be so obvious to those meeting Lance – as he prefers to be called – for the first time is that he's a phenomenon.

"The doctors tell me that he should be having strokes and organ failure," says Lance's mother, Renee. "He's my miracle."

Lance has extreme vascular problems. Among them are that his arteries and blood vessels are very narrow, making it difficult for blood to flow properly.

"Lancelot's normal blood pressure (BP) before being regulated was 250/200, and his heart rate was 200," Renee explains. "If he misses one dose of his BP meds, it shoots right up there, and recently it has started breaking through the meds again. Any other heart would have enlarged and burst long before now, but God has blessed Lancelot's heart to take these extreme pressures."

He also has sensory integration dysfunction, which means he has difficulty organizing information as it comes through his senses.

"So if we're riding in a car and we go 'round a curve, to him, it feels like he's being flung like a slingshot," Renee explains. "When we're on a road with multiple lanes, it feels like cars are zooming right by his head."

In addition to a host of other medical challenges, Lance also has Williams Syndrome, which is characterized by cardiovascular disease, developmental delays and learning disabilities. However, those with Williams Syndrome, and Lance is case-in-point, have strong verbal and social skills, including being polite, friendly and expressive.

Those skills have certainly come in handy as Lance and Renee have researched and visited dairy farms all over the country.

"Lance will search for farms to visit and then hands me the phone number to call and ask," Renee says. "Very few people tell us no."

The never-ending "quest" as the duo calls it, has taken them to Hoard's Dairyman headquarters in Wisconsin, Mason Dixon Farms in Pennsylvania and Old Mill Farm in Virginia, home to the legendary Brown Swiss cow, Snickerdoodle.

And it all began with a family friend giving Lance a copy of Hoard's Dairyman. From there, he soon began asking Renee to visit farms.

On the way home from an unexpected request to visit the beach (Lance had been very anti-beach up to that point), Lance had a request for his mom.

Their quest has also allowed them to pursue Lance's other passions: peacocks, trains and draft horses. 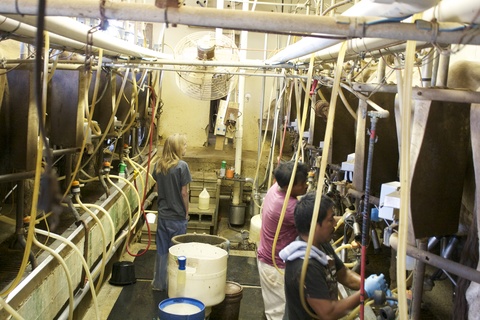 I met up with Lance and Renee at Southern Swiss Dairy in Waynesboro, Georgia. This was actually their second trip to the farm, owned by the Franks family.

On their first visit, Lance discovered a copy of Progressive Dairyman magazine and asked if he could keep it. Jimmy Franks politely explained that he hadn't had a chance to read that issue yet, so Lance soon had Renee hunting down a way for them to receive a copy too.

Luckily for us, Renee's hunt led her to join the Proud to Dairy network. And yes, Lance is currently receiving the magazine!
During their second visit to Southern Swiss Dairy and my first, the three of us heard from Ginny Franks as she described the aftermath of a March tornado that tore through their farm and took out their freestall barn and some of their Brown Swiss cattle. (Watch for more info on Ginny's story in our November "Women in dairy" issue.)

We ended up a second farm that day, and Renee wasn't surprised.

"He usually finds a way to see as many farms as possible in one trip," she says. Ginny took us to Pineland Dairy, a 490-cow grazing herd just down the road. We spoke with owner Beryl Landis and herd manager Andrew Peachy, pictured at right with Lance, and we were able to watch the 60-stall rotary in action.

"So what's your favorite kind of milking parlor?" I asked Lance as we were waiting for the herd to move from the pasture to the parlor.

"Herringbone," he responded quickly. "Then robotic. Then rotary. Then parallel. But they're all my favorite."

"Have you been to a robot dairy?" he asked.

"Where at? How many cows did they milk?"  PTD