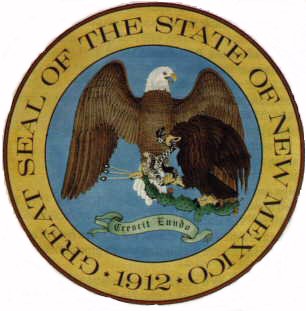 Crescit Eundo. That's the state motto of New Mexico, which was acquired by the United States after the Mexican War around 1848. The phrase means "It grows as it goes," and it was first used in 1882 when it was added to the state seal.

The words are originally from a poem by Roman philosopher Lucretius, who is believed to be describing a thunderbolt increasing in strength through the sky, symbolizing dynamic progress.

Both "crescit eundo" and "dynamic progress" are phrases that can be used to describe New Mexico's dairy industry, which has seen tremendous growth and efficiency, especially within the last few years.

New Mexico now ranks 8th in total milk production, 3rd in pounds of milk per cow and first in number of cows per herd.

In addition to striving for environmental compliance and sustainability, New Mexico's dairy industry is a huge asset to the state's economy. For every 100 cows, a job is created directly in the dairy industry. Indirectly, New Mexico dairies provide nearly 18,000 jobs.

And the great news is that plenty of young people have a desire to continue growing New Mexico's number one agricultural industry.

Take for example the Southern Great Plains Dairy Consortium Teaching program (SGPDC), which brings together faculty from the leading institutions in dairy herd management and the students eager to learn.

For even more facts about New Mexico's dairy industry, visit the New Mexico State University Dairy Extension site, and be sure to download the "New Mexico Dairy Facts" pdf file.

Lucretius may have been describing a thunderbolt when he first penned "crescit eundo," but his words today serve as a reminder of how far the progressive New Mexico dairy industry has come in such a short time and the potential for future growth.