When it comes to building dreams and families, Clay Walker
of Bokchito is the man. Clay's story starts in Texas, when his best friend told him that he had fired his milkhand, and, like any good friend, asked Clay if he could help out. Low and behold, two weeks later Clay was milking 120 cows.

As time went on, Clay started taking on other duties around the farm; record keeping, heat dates, and treating sick cows. In the midst of this, his boss/friend expanded his herd to 200 cows, which meant taking on more hired-hands. Clay was put in charge of managing two new employees, which he explains, is not something he found to his liking. "I probably didn't like that as much as I liked doing everything myself."


So, Clay started conjuring up a plan for him and his wife, Jocelyn, to start their own dairy. With lots of help from his friend, Clay and his wife were able to make suitable barn plans and take out a loan.


The Walkers then took their dreams to Oklahoma, where Jocelyn's grandparents owned a ranch. Clay bought 130 acres of land a few miles away, and built his barn to house his milk cows. In addition to the milk cows, Clay and his wife raise their own replacements on their grandparents' ranch, along with steers, dry cows and their grandparents' Angus cattle.

And this workload gets heavier. Clay and Jocelyn also have a son, two-year-old Mason. "Mason has autism, so Jocelyn stays at home with him so she can work with his doctors and therapists," Clay says. "She also 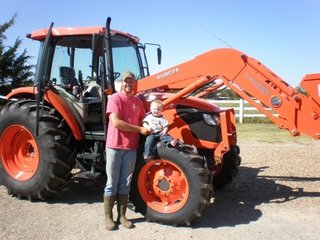 baby-sits for some friends three days a week, takes care of the beef cows, the bills, the taxes, the paperwork, and makes trips into town when I need something. She does more work than I probably give her credit for."

Currently, the Walkers are milking 80 cows, in a double six herringbone parlor, with a herd average of 52 lbs of milk, 3.2 in protein and 4.2 in butterfat. "Our dairy is a little different than most around here. We milk jerseys and jersey cross cattle in a rotational grazing system." Clay says. "I feel that in our heat, Jerseys are much better grazers than Holsteins, and they are easier to manage in this type of system."


And so far, it's working. The Walkers have been on their own in the industry for four years now, and they don't plan on stopping anytime soon. "Someday when our loans are paid off, we'll be in good shape! My banker, my feed company, and I will all breathe a huge sigh of relief!"


Good luck to you and your family Clay! Comment by Ryan Curtis on May 14, 2010 at 11:29am
I personally love ANY flavor of Blue Bell Ice Cream!! It's a little pricey but it's really tasty. Good choice Clay.