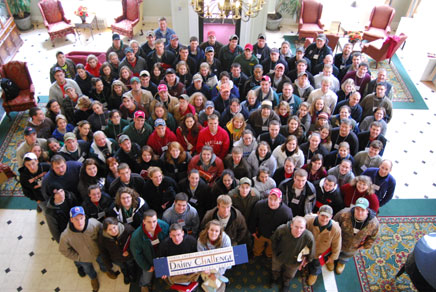 Dairy Challenge is a unique event that gives students the opportunity to be a consultant for the day. And in the regional dairy challenge competitions, teams are made up of students from a variety of schools in that area. Students are asked to evaluate and collaborate with complete strangers to come up with viable, profitable recommendations for the dairy farm they visit. They present their findings to a panel of judges and are evaluated, with the top teams for each farm receiving the platinum award.
Of the three dairies participating in the Northeast Dairy Challenge in Glens Falls, New York, we asked a judge and one team to give us an insight into the strengths and opportunities for improvement for the dairy they visited.
Farm 2 is an 850-cow dairy that is a “very well run family operation,” according to Lloyd Holterman, a dairy producer from Watertown, Wisconsin, and a judge on the dairy. Farm 2 has been able to internally increase its herd size by 150 milking animals in the last 10 years. They milk the cows in a double-10 herringbone parlor 3x with two employees. They average around 70 pounds of milk a day with no rBST.
Holterman said that the dairy’s greatest strength was their ability to manage their resources well. He mentioned that because of their strong work ethic, they would make good employers and would probably be just as successful in any other industry. His recommendations were directed at the expansion process they have been in.
“When you look at their facilities – because of their good management skills – their herd has grown very rapidly,” Holterman says. “We all tend to build buildings one at a time, and then all of a sudden, five years later, the buildings are too small. So I think they need to take a careful look [at that] and also the location of their farm. I think getting things worked into the future, as far as business growth at that site, would have to be carefully planned.
“I think that’s the same problem that we have in farms all over the U.S.,” he continues. “Growth is great, but it’s hard to plan what you’re actually going to need five years from now.”
The team of Sarah Flint (Vermont Technical College), James Hunt (SUNY Cobleskill), Glen Moss (Morrisville State College), Kelly Pettit (Cornell University), Peter Yoder (Pennsylvania State University) and Camille Coleman (University of Maryland) also found the dairy to be well managed.
“Overall, I thought it was a great farm,” said Pettit. “It was awesome because it was really hard to find what was wrong. It’s cool to hear all the different ideas.”
The students’ list of recommendations ranged from cow comfort to SCC to nutrition. They estimated that by making these recommended changes, the farm could save more than $150,000 per year.
They also suggested that the stalls needed to be enlarged to allow the cows more room to lay down. One way to achieve this was to take out the brisket board, which would cost about $2,000 total. The benefit of cows laying down for an added hour a day would increase production by two pounds of milk a day.
The second recommendation was to decrease SCC by more selective culling, which would also help with overcrowding. With a higher premium for lower SCC milk, the farm stands to increase profits $.25 per hundredweight.
The final recommendation was looking into the ration to evaluate the amount of protein being fed and then reducing that amount. They suggested getting the ration below 17 percent crude protein and evaluating NDFs. They said that an extra $.30 per cow per day could be saved.
The Northeast Regional Dairy Challenge winners are below.