Proud to ACT for the future

One thing that sets humans apart from other species is our ability to communicate complete thoughts through words. That communication helps us to organize efforts, combine thoughts to make new ideas and share feelings. Communication is very important in every business and industry because that's how we inform someone else about what we offer and why it's important. In the dairy industry, there are many people that focus on communications. As the industry and society as a whole change, we need communicators that are able to keep up with these changes.

"We are the future," says Tyler Bowser, agricultural communications major at Kansas State and current president of Agricultural Communicators of Tomorrow (ACT). "And a lot of us that participate in ACT remain tied with it. I can go to Ag Media Summit or some company and say I was in ACT and others will say, 'Oh yeah, I remember my time there.' So in the future it will still be a good networking tool."

Started in 1970 by Jim Evans and 20 other students and advisors from a handful of schools, ACT was established as an organization that would help develop and build professional development skills in college students. Evans also wanted a way for students and industry professionals to build relationships. Almost 40 years later, there are 25 universities and 350 members, and Bowser is trying to get more students involved.

"A lot of agricultural students aren't interested in journalism, and journalism students might not be interested in agriculture," Bowser says. "So we have to fill that void. We have to say, this is what we do. We help you build relationships, we help you network and we point out the positives that ACT can do. We want to show them a good time."

Bowser has experience crossing that void. He started out as a pre-vet major at Kansas State. After a few classes he decided it wasn't for him. When he was looking into other programs, he realized he enjoyed meeting people and talking.

"I met my advisor and she really opened my eyes to the ag industry, communications wise, and I just fell in love with the program there," Bowser explained.

To him, ag communications and ACT is about building bridges.

"That is one of our goals at Kansas State and nationally is to show people the importance of the program and everything you get out of it," Bowser says. "We want more people to participate, so even though it is a small field, it is growing all the time. I'm really excited about the environmental side of it, with the alternative energy and all that, because not very many people out there are interested in both agriculture and environmental issue. I am and I want to help build that bridge between the opposite groups." 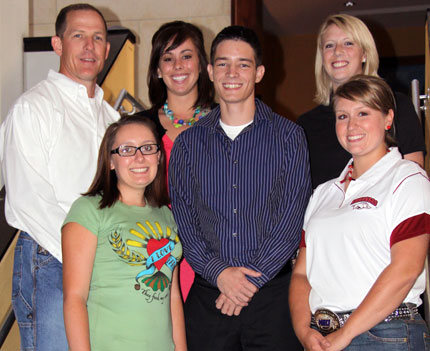