So, how did you come to be interested in Dairy?

I got an email the other day suggesting a blog post:

“I'd like to know more about how you became interested in dairy. You said you live in town and your parents and grandparents weren't involved in raising livestock through 4-H or FFA. So how did it happen? What sparked your interest in dairy?” In my family, it’s been three generations since anyone was involved in agriculture. Most all of them sold products to creameries.  Only one still farms and he only has a few beef cattle.  I’m not a farm kid.  I’m not even a country kid, but  I am a third year 4-H member with four registered dairy show cattle, with another calf on the way, and assorted pairs of orphan calves that I tend every day.  I don’t even live in the town where my cattle are.  They live at my Godmother’s little farm, so I do chores every day on the way home from school.  On weekends, holidays, and breaks, I still make the half hour trip from my house, do chores, and make the half hour trip back home again.  Even people who know my family wonder how I ended up raising dairy cattle.

I’m guessing I was just over a year old when my mom made arrangements for me to come to the FFA Week Petting Zoo at the high school where she teaches.

My (now) 4-H leader carried me around and showed me all of the animals.  The one animal that I pet and seemed to like the best was “Daisy”.   She was a dairy heifer that one of the students had won in an essay contest.  I attended the FFA petting zoo every year for at least eight years. When I was about four,  I started my Pee Wee Showmanship career.  I came to the Local show and showed every species.  I went to the County show and showed beef, dairy, and sheep. 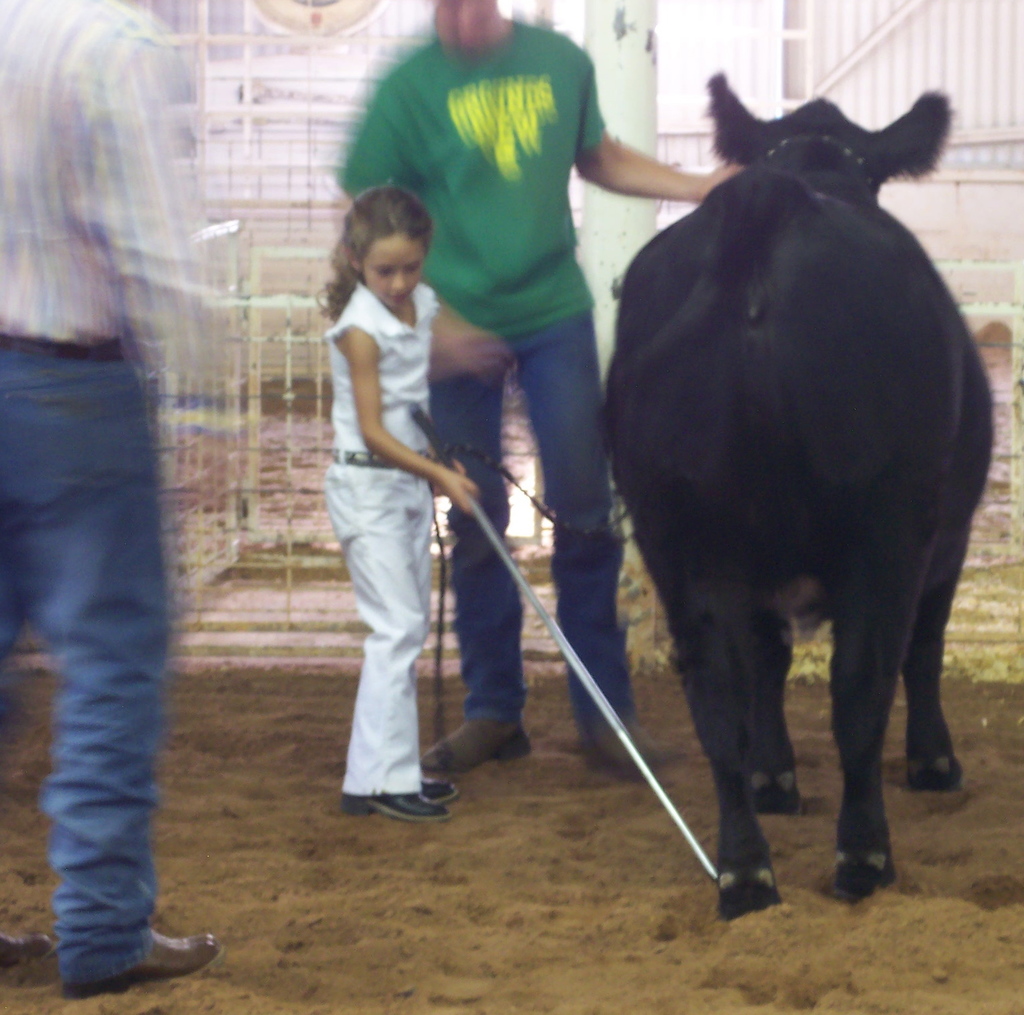 I went to the Sooner State Dairy Show, and  I went  to the Oklahoma State Fair to do Showmanship.  The ring was almost full, and as I got ready to walk through the gate, I looked up at my Godmother and announced that I could do it all by myself.  I led that giant Holstein around the ring with no problems.  My mom still tells the story about how I was the smallest kid in the ring with the biggest animal and the only one with no help at all! Another year I started doing the Purdiest Cow Contest.  The little Jersey and I were "Hey diddle diddle the cat and the fiddle, the cow jumped over the moon."

It was also around that time that I learned I could be in 4-H and have my own heifer when I turned nine.  I thought my ninth birthday would NEVER come!  After I turned nine, two very special friends decided to give me one of their Ayrshire calves to raise for my own. 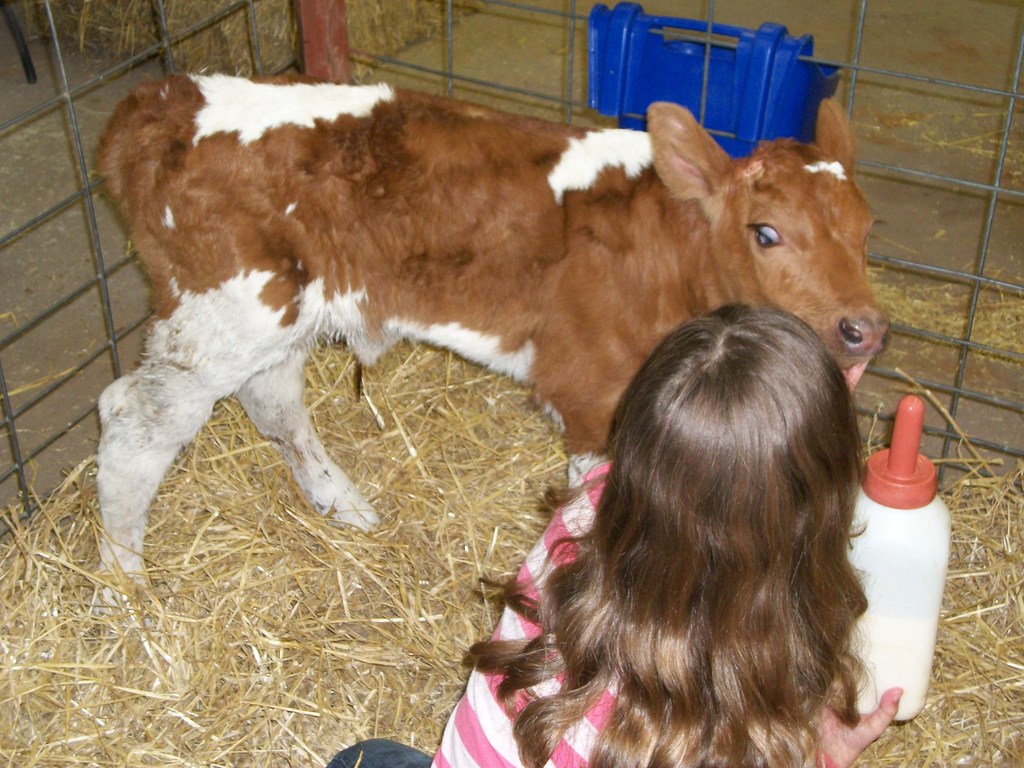 Since then,  I have saved up my stock show winnings, birthday money, Christmas money, and odd job money and bought my other animals by myself. I bought a Brown Swiss calf.  I made and paid off a purchase agreement for a Holstein yearling, and I financed my Brown Swiss nurse cow and paid her off.  I sold the Holstein and kept her heifer calf.  My Ayrshire is due in less than a month.  The Brown Swiss nurse cow gets preg checked in three days, the Brown Swiss heifer is going to be in heat any day now so she can get A.I.ed., and I have bought and sold three pairs of orphan calves for my nurse cow to raise.

“Where do you think your determination comes from to raise dairy animals?”

I guess it does take a lot of determination to raise dairy cattle.  In my little corner of the world, dairy doesn’t get much respect.  Our county only allows ONE dairy heifer in the premium sale.  They do not allow dairy to compete for money in showmanship.  They do not allow any crossbreds.  They do not allow any fresh or dry cows.  Over the winter, our STATE Fairgrounds tore down the cattle barns and rebuilt them...without a milking parlor.  There will be no cows, not even dry ones, shown at the State Fair starting this fall.

Even though dairy is treated the way it is, I keep working.  Maybe it’s because I’m stubborn.  My MawMaw looked at me on the day I was born and told my parents, “That is going to be a strong-willed child!”

The work is hard, and sometimes I get frustrated.  Not as much as I did when I was littler.  But when I do, and I get UGLY, my mom stops me and asks me, “So what do you want to do?  Quit?  Sell out? It’s fine if you do, because it will save us a lot of money.”  She says the same thing every time because she knows that those words will shake me up and get me to straighten up SUPER-FAST!  She knows I don’t want to quit.  Quitting is like being beaten, and who wants to feel the agony of defeat? 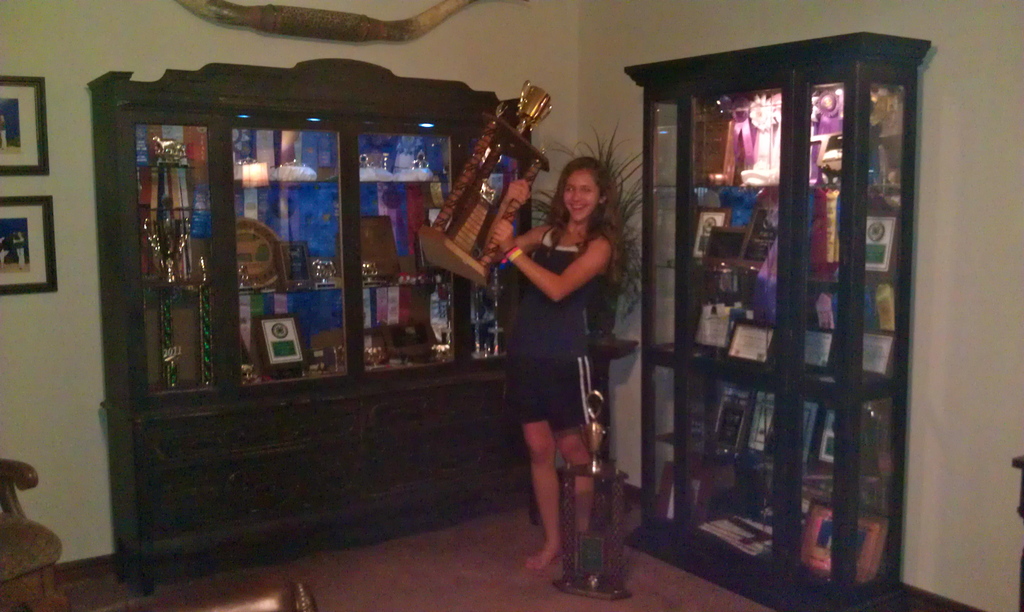 Written for Proud To Dairy/Progressive Dairyman

I'm very disappointed.  I forgot to mention in my blog post that the Oklahoma Youth Expo, which is known as "THE WORLD'S LARGEST YOUTH LIVESTOCK SHOW", also DOES NOT HAVE A DAIRY SHOW.  -Maddie Moo :(