I’ve been on TV twice.

The first time was an accident.  I was so excited.  I even saved the cllip from the internet!  I wrote about it in my blog back in March. 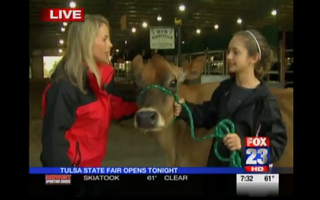 I got my two minutes and fifty-two seconds of stardom on the seven A.M. broadcast of Fox 23-Tulsa in 2011 while at the Tulsa State Fair.

Reporter, Kristin Tallent, came through the barn early that morning.  The ten of us had just finished all the feeding and watering and cleaning bedding.  She and her coworker looked around the dairy barn a little while, and when they came back, she stopped and asked if anyone wanted to be on tv.  We all just kind of looked at each other, and then I threw my hand up in the air and said, "I do!"

She took me with her and explained what we would be doing.  I pulled back my messy hair, brushed the dirt off myself, and borrowed my mom's windbreaker.  It was the cleanest dirty shirt we had with us in the barn.

They were doing a segment on the opening day of the fair.  They also wanted me to have a heifer in the interview, so I had to borrow one.  My heifers were arriving on a second load not too long after the interview would have been over.

It was so exciting!  She asked me questions about all the work that I put into getting ready for the fair, and of course, the heifer decided to act up.  I was scared she was going to knock us down, but she didn't.  I also wondered how I would look on tv being all dirty and yucky from my work, but you know, I looked pretty good!  Thank goodness for that cleanest dirty shirt!

When I got back from filming, apparently my mother had e-mailed the link for the re-broadcast to my homeroom teacher! Then my teacher showed it to the whole sixth grade! So when I got back from the Tulsa State Fair, everyone was calling me "Superstar".  One of my friends said, " How was your trip?" I said "Fine." He nodded and said, "I saw you on tv!"

That was one of the funnest days of my life!

The second time I was on TV, it was a real production.  The same channel, Fox 23 from Tulsa, sent morning show host Lacey Lett and a cameraman down from Tulsa clear to Crescent to interview me and film me with my animals.  It was just after lunch so I had to take out of school to do it.  They gave us a list of questions about a week ahead of time, so I was prepared.  The only problem was, the reporter would get distracted with something else and ask me a different question before I totally finished talking about what I had been asked.  When you are talking to reporters, most likely they are not going to know anything about your area of agriculture or animals or anything.  They may depend a lot on you to steer the direction of the interview.  The thing I did wrong was not keep things focused.  I think that can happen to anyone very easily.  This lady was nice and wasn’t trying to make me say anything negative, or trip me up, but some reporters might.  I think the one thing that anyone should do is to keep talking, finish what you were saying, and if you didn’t get to finish, go back and talk about it some more.  Just tell them, “I’d like to say some more about ____” and do it.  I was too shy, but next time I’ll know better.  Lacey Lett was very kind to me and was very interested.  She made the long process as painless as possible.  They made a really nice little segment about my animals.  It was okay, but if I would have been more involved, it would have been something for me to be REALLY proud of.

Awesome! Thanks for sharing your tips, Maddie. This is super helpful!