He has traveled all over the world and performed in countries like Australia and Russia.

His most recent gig has been in Sarasota, Florida, with Circus Sarasota, where he serves as a humor specialist. 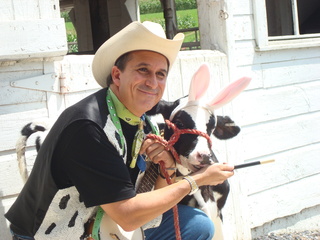 This “regular day job” is flexible enough that he’s able to travel along the East Coast to also perform at fairs and festivals.

About 10 years ago, he attended a fair convention and met Daniel Love of East Waterford, Pennsylvania.

A dairy farmer hoping to earn some additional income, Love began a talent agency and helped local fairs bring in country music acts. Since Steinberg lived on a dairy farm for 12 years prior to moving to Florida and had played around with the idea of a “moo” theme, the pair became fast friends.

“Farmer Dan,” as Steinberg calls him, invited the performer to his family’s farm.

Love explained to Steinberg all aspects of the operation: from the moment a calf is born on the farm all the way to how cows are milked and how Love uses computer software to manage the herd.

“His enthusiasm for dairy farming really rubbed off on me,” says Steinberg.

And so the idea for “The Moogician” was officially born. Steinberg began incorporating dairy facts into his performances.

He juggles balls of mozzarella cheese. He performs magic tricks with milk, cheese and yogurt. He tells cow jokes. All this while telling his audience that milk and dairy products are healthy for them. Steinberg says the audience loves it and it’s making dairy farmers happy too.

“Dan tells me all the time that the farmers appreciate it. He says, ‘We need all the help we can get.’”

As for Steinberg, this role is having an effect on him too.

“I’ve done a lot of performing in my lifetime, but nothing has ever inspired as much as the dairy industry,” he says. “I’m absolutely loving it!”

Steinberg likes to end his performances with one final word of encouragment for consuming dairy products: “The more the moo, the better you’ll feel, so drink milk at every meal!”

Learn more about Steinberg’s act at: www.billybobsteinberg.com, and learn how you can book “The Moogician” at www.loveshine.com.  PTD