The following are the Proud winners of the Proud to Dairy Contest 2010. Great job everyone on your entries and we'll see you again at the next contest!!!


So Leslie, how did you feel when you found out you won the Photo contest for Proud To Dairy?


“I was shocked and very honored,” Leslie says. 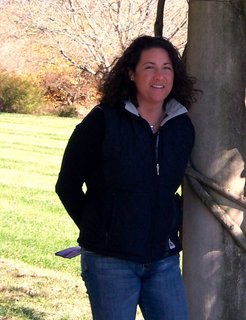 Growing up in California, Leslie was surrounded by an agriculture-based family. With a degree in Animal Science from Kings River Community College, Leslie became more involved in other species, including dairy cattle.

Leslie has made a big splash in the agricultural world, through her Director of Operations position at HOOF-it Technologies, where they are continually developing new products to help in the comfort and production of dairy cattle.

Leslie views Proud to Dairy as a “really great platform to interact with other dairy professionals." She also says that she is so excited to be helping our industry by providing us products that influence the well being of our dairy cows.


So Leslie, what are you going to do with your new ipod nano?


“I plan to listen to music and show off the “Proud To Dairy logo,” Leslie says. “I think it is really cool that you have the logo engraved on the back of the ipod.”


Favorite Ice cream: Coffee - got to love the Mooooo Joe


Favorite Milk flavor: Whole Milk – However a latte is up there as well.


Favorite Cow: My mother’s cow, Hazel, has been a long time family favorite.

Katherine Dotterer-Pyle's submission for Contest 2010 was inspired by a "Thank you" card she sent to the friends and family that helped her and her husband move their cows from a dairy in Virginia to Pennsylvania. Piper is the Jersey cow standing with the Pyles – just like a member of the family. Because the 4-year-old Jersey is so special to them, Katherine thought it appropriate to have her be part of the note of appreciation.


"She's like my kid – we don't have any kids, so she's my cow," says Katherine, who has lived on a dairy all her life. "She won't ever see a beef truck because I won't allow it. She was a graduation present from my husband." 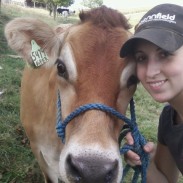 When the photo contest rolled around. Katherine was

racking her brain over what to do. When she thought of

the thank you card, she decided not only to use the signs,

but also to have Piper in the picture too.


The family holding signs wasn't actually Katherine's
first choice for the contest. She wanted to shave the
logo into the back of someone's head, but found it
hard to round up volunteers. She still holds out hope that she will be able to do it as a possible entry in future contests.

As second place, Katherine is the owner of a new Ogio backpack, which she says will come in handy as she will be going back
to school soon.


"I wanted the iPod really bad," Katherine says. "When I saw all the prizes, [I thought] the backpack will come in handy. And you can always use a hoodie and blanket. So any one of those prizes would be cool. The iPod would be the coolest, but [the contest] was a lot of fun."


"I'm proud to dairy because I am proud to be in a really great group of people that support agriculture and that provide food for the entire world," explains Katherine, who milks 230 cows at Cow Comfort Inn Dairy – Where cows enjoy their stay.

The herd is half Holstein and half Jersey. "I love the life. Cows can be stupid, but for some reason I love the things. It's all I've really ever known. I grew up on a dairy farm, I worked on a dairy farm. I think [the industry] full of really great people; honest, hard-working people."

Eileen and Charlene will each receive a blanket and hoodie with the Proud to Dairy logo on them. Eileen's creative submission pictured a calf with a Proud to Dairy wrapped round bale, while Charlene's photo featured her adorable son, Luke, wearing a Proud to Dairy bib.

Charlene, originally from Pen Argyl, Pennsylvania, got her start in the dairy industry early in life and quickly developed a passion for breeding, showing and judging high-type Brown Swiss and Holsteins. Her skill and talent led her to Penn State, where she participated on the dairy judging team. In 2007, she was the high individual in World Dairy Expo's judging competition and a member of the first place team.

And although she may be one of the top young judges in the country, she's just as content donning work clothes and heading to the barn to take care of the bovine beauties herself. During her time as a student at Penn State, Charlene took a job working for a local, well-known operation, Ideal Holsteins. It was here that she met her now fiance – Adam Tanis. In December 2009, Charlene and Adam welcomed a beautiful baby
bo

y, Luke Jacob, into the world. With both sides of the family
having ties to dairy, the couple has received lots of cow-print
baby clothes and accessories for little man Luke, and one such gift
was the Proud to Dairy bib.

But 'Proud to Dairy' isn't just a logo for Charlene and her family. It's a way of life.

"We are proud to dairy because nothing gives us more satisfaction than watching baby calves grow up to produce nature's most nearly perfect food - except perhaps now watching Luke grow up with them!" Charlene says.

Like Charlene, Eileen grew up in the dairy industry. However, her family's breed of choice is Ayrshires. In fact, her family's herd as the lowest somatic cell count in the county for Ayrshires, and they have even had a few bulls go into stud. Eileen is especially proud of one her five-year-old cows, who has been scored 2E (90 and 91).

She has also participated in a number of agricultural activities, including 4-H, FFA, dairy quiz bowl and dairy judging. She is also serving as the Wayne County Dairy Princess this year.

Her submission in Contest 2010 was a collaborative effort between her and her younger sister, Diane. They had the idea to draw the logo on a different kind of blank canvas – a wrapped round bale. Eileen says Diane drew the logo freehand using permanent markers, and it took her only about an hour and a half. The calf pictured with the bale was only a few 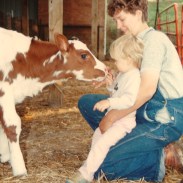 "When we were finished with the picture, we took the round bale to the end of the driveway to show everyone who drove by that we are 'Proud to Dairy!'" Eileen says.

Eileen is especially proud of the fact that her is second-generation with lots of family members involved.

"All the children and grandchildren help out on the farm as well," she says. "We have made it this far in the recession with no signs of shutting down anytime in the near future – and that's something to be proud of, anytime!"

Comment by Emily Caldwell on July 8, 2010 at 3:04pm
And to learn more about the fifth participant and one of our favorite bloggers, Miss Barbara Martin, check out:

The blog written by Ryan: http://proudtodairy.ning.com/profiles/blogs/dairy-goddess-aims-to-c...