Why Blue Moon is Best! 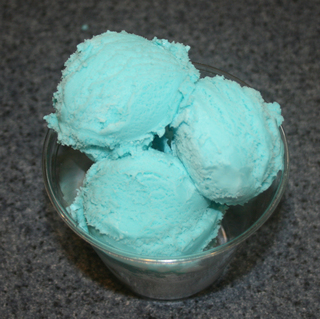 I’m excited to participate and to represent the flavor Blue Moon. While I could have chosen one of my other favorite flavors like Babcock Hall’s Chocolate Peanut Butter or Cold Stone Creamery’s Cake Batter (with brownies and gummy bears), I believe Blue Moon is the best choice.

Many people are unfamiliar with this creamy frozen treat, but it is one that is hard to miss when you come across it. I have a hard time recalling exactly when I was first introduced to this fantastic flavor, but I do know where. I was at Mullen’s Dairy & Eatery in Watertown, Wis. The memory is a bit hazy, but I’m guessing I was either with my parents or grandparents on the way home from the Dodge County Fair. As I pondered which of the many flavors to select, someone suggested I try Blue Moon.

From the moment I saw the scoop of bright blue ice cream come out of the freezer I was mesmerized. This was much different from the usual browns and creams you usually see in the dairy case.

And the taste, well delicious, of course. I’m sure you’d like for me to describe to you what exactly it tastes like, but that is nearly impossible because no one really knows. Some people say it tastes like Froot Loops cereal, but since I’ve never had a bowl, I can’t really agree. But delicious is quite accurate.

What most intrigues me about Blue Moon is that it is hard to find. For a while, the only place I could get it was a Mullen’s and that was usually only once a year. Then an ice cream stand at the mall had it as an option. A number of years ago, Cedar Crest brought this enticing flavor to area grocery stores; and I recently had a scoop of it at the Babcock Hall Dairy Store.

Apparently Blue Moon is really only known (and available) in the Upper Midwest. As the midwest editor for Progressive Dairyman, it is part of my responsibility to share what is happening here with the rest of the country. I would wager the secret of Blue Moon fits that mold.

However, I can only spread the word with your help. Basically, I need your votes. In Round 1 of the Flavor Face-Off, Blue Moon is up against a tough competitor from the West Coast - Thrifty Chocolate Malted Crunch. Click here to read about this head-to-head challenge. Then cast your vote here. You have until June 14 to participate in Round 1 voting.

You’ll have the opportunity to vote for flavors in all of the eight first round brackets, so please read up on all your choices here before casting your ballot.

Thank you for your support!