I recently had the opportunity to be apart of the eighth class of the Holstein Foundation's Young Dairy Leaders Institute. This unique leadership training program is geared toward young (ages 22-45) dairy producers and those working in the dairy industry.

The program is divided into three phases. During Phase I in Albuquerque, New Mexico, we explored our individual personality traits and learned tips on interacting and working with each other. I personally discovered that I'm more of a detail-oriented person than a global thinker, meaning I prefer to have a plan in place to accomplish a goal.

My introvert tendencies also made the media training aspect of the program particularly nerve-wracking. Dairy Management Inc's David Pelzer as well as communications consultants Michele Ruby and Joan Horbiak provided training in speaking up for the dairy industry, both on camera and through social media. 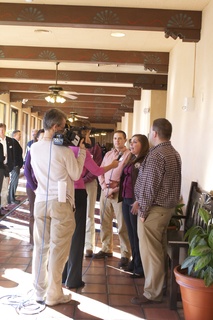 All participants had a chance to break out of their comfort zone and be interviewed on camera, with Horbiak acting as a pushy member of the media, asking tough questions and trying to catch those interviewed off guard.

During her training, Horbiak said, "It's not self promotion. It's self preservation."

Despite my own reluctancy to go on camera, I understand the importance of being prepared and being able to speak to the media about dairy industry issues.

We were also provided with tips on speaking with the public about industry issues and had the opportunity to practice. We divided up into groups and arrived at the University of New Mexico campus to seek out conversations with students and faculty there.

I expected most to have the viewpoint that organic milk was healthier, and I anticipated that some would tell us they were vegans or had dairy allergies. I was surprised, however, to find that nearly everyone we spoke with felt that dairy cows were treated poorly.

Even those who were regular consumers of milk said that they tried not to think about how dairy cows were treated.

One student even shared with us that a recent PETA organization had arrived on campus the week prior and offered students $1 to watch their video about animal cruelty.

This really opened up my eyes to the fact that the dairy industry has a lot of work to do in educating consumers.

Luckily, Phase II of YDLI is designed to do just that. We're each charged with several action items to be an advocate for the dairy industry. We'll need to write letters to local media and legislators, introducing ourselves as a local source able to speak about dairy industry issues.

We've been assigned to prepare and deliver a presentation or speech to a local community group or organization. And finally, we will each be completing a project where we're challenged to take advocating to a new level. Past YDLI Phase II projects have included a pen pal program, connecting school students with dairy farmers, and starting a dairy blog.

During Phase III, we'll reunite in Albuquerque in February 2014 to receive additional training in public policy and advanced communication skills. 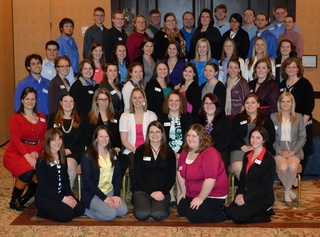 I'm beyond grateful for the training and the encouragement I've already received to stand up and be a better spokesperson for the dairy industry. An added bonus is the 50 new real life (and Facebook!) friends I've been able to make.

You can learn more about Young Dairy Leaders Institute here, and follow the blog and Facebook page for ongoing updates.

I'll be updating Proud to Dairy with my personal YDLI journey, so check back often!  PTD